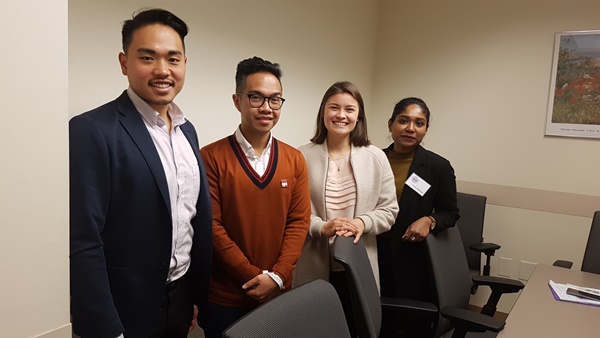 Despite the gloomy weather on April 25, 2018, and in the midst of the nation’s anti-immigrant climate, the Chinese-American Planning Council, Inc. (CPC) joined collective forces with over 45 Asian led and Asian-serving organizations for the Coalition for Asian American Children & Families’ 10th Annual Asian Pacific American (APA) City Advocacy Day. Under CACF’s “15 Percent and Growing Campaign,” a stat that represents the percentage of APA’s in New York, we demanded equitable state and city funding, and called for enhancements or full restoration of budget priorities that address the immense needs of Asian communities across New York City.

From the steps of City Hall and meeting rooms of the City Council offices, CACF underscored jarring statistics that not only belie stereotypes perpetuated by Asians portrayed as the model minority but also highlighted the plight of disadvantaged Asian families. Asian Pacific Americans have the highest rate of working poor across all racial groups in NY with over 25% of APAs in NYC continuing to live in poverty. Additionally, APAs have the highest poverty rate in NYC amongst full-time, year-round workers, and 89% of Asian Americans uninsured in NYC are foreign-born. Though NYC has nearly 1.3 million Asians and represents 15% of the city’s population according to US census, APAs only receive 4.06% of City Council discretionary dollars and less than 1.5% of social services contract dollar. Failing to adequately invest in APAs would mean large pockets of families in more than 25 districts in NYC will not have the same resources to thrive and achieve economic self-sufficiency.

About 300 impassioned community members, services providers, advocates, and elected allies partook in the event. To illustrate the diversity of organizations in this crowd, there were banners from CACF, Japanese American Social Services, Career Mobility Partnership, Chinese American Family Alliance for Mental Health, Charles B. Wang Community Health Center, Asian Pacific American Labor Alliance, Korean Community Services of Metropolitan New York, Korean American Family Service Center, and Homecrest Community Services. Posters captured other facts, such as 40% of NYC APA youth not being college-ready upon graduation from high school and Asians having the highest rate of linguistic isolation of any group in the city at 42%, meaning that no one over the age of 14 in the household speaks English well. In unison, we chanted, “Budget equity is our demand” and “APA Power!”

During the Press Conference and Rally, CPC’s President and CEO Wayne Ho fervently echoed the purpose of the “15 Percent and Growing Campaign”: “The message is simple today - make sure the fastest growing community in NYC gets a fair share of the resources.” Investing in local community groups that provide culturally competent and language accessible services would enable more individuals, for the first time, to access an early child care center, take English classes, speak to a lawyer, and obtain work-readiness training. He also added that Asians have the highest proportion of immigrants getting naturalized – this is a significant finding as we foresee more Asians exercising their civil rights and contributing to the City’s economic growth.

Weeks prior to CACF’s advocacy day, CPC staff members attended CACF’s advocacy training, held at Teach for China’s NY headquarter. We learned about the budget process from the reports releases on city’s finances and performance and mayor releases of the Preliminary Budget for the upcoming fiscal year to the city council negotiating changes to the Executive Budgeting and voting to approve budget; identified the budget players, one of which is Council Member Carlos Menchaca who represents District 38 and thus Sunset Park which is home to CPC’s Brooklyn Community Center; saw the power of advocacy that has led to increased discretionary funding for APAs as seen in the last seven fiscal years; and committed ourselves to CACF’s 2019 Fiscal Year Budget Priorities.

These priorities consist of these following areas:

CPC staff members attended 10 of the 24 legislative meetings in the morning and afternoon, speaking to council members, budget and legislative directors, and other staffers to explain CPC’s impact through storytelling and the implications of increased funding. With more than fifty years of existence, CPC depends on government funding to sustain and expand programs like workforce development, English literacy classes, and childhood education, and senior care to meet persistent and emerging needs of the nearly 60,000 people we serve every year.

CPC staffers shared their experiences and thoughts in the quotes below:

“From my experience, I felt that the event was very successful. It was amazing to see such a large turnout of constituents, clients, participants, staff, and government officials to the press conference. While there are a number of council members that consistently provide funding to APA community providers, it is imperative that more of our elected officials continue this work and strive for equitable funding to keep up with our growing populations, each with their own unique concerns.” – Bryan Lucero

“It was both interesting and intense to represent our agency and community members to have conversations with the council members and their staff. I have gained great experience and understanding of community needs today throughout different meetings and the rally. I had meetings with the offices of Council Members Ampry-Samuel, Chin, and Levin. I was able to talk to each council member about immigrant services, nonprofit stabilization fund, and youth services at the meetings.” – Grace Wang

"CACF's Advocacy Day was both nerve-racking and exciting as this was my first time partaking in anything like this. Having gone through the experience of representing CPC and the Asian community and directly interacting with local politicians made me feel incredibly proud that I did something positive." - Simon Weng 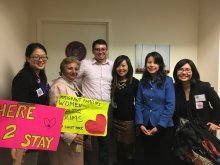 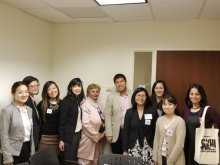