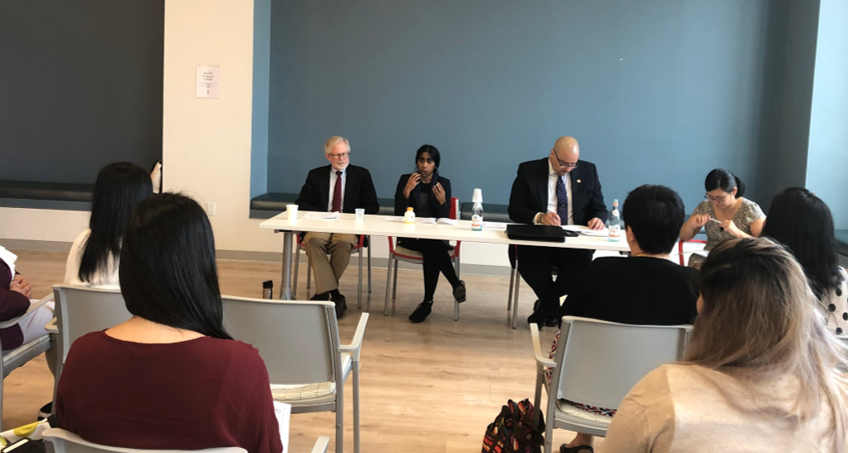 The Coalition for Asian American Children and Families (CACF) and Project CHARGE (Coalition for Health Access to Reach Greater Equity) members, including CPC, hosted New York State elected officials and advocates for a forum on the New York Health Act.  The speakers included Assemblymember Dick Gottfried, Chairman of the Assembly Committee on Health and Senator Gustavo Rivera, Ranking Member on the Senate Committee on Health, who are the sponsors of the bill, as well as Winn Periyasamy, Policy Analyst for Health at FPWA, who is part of the Campaign for New York Health.

The New York Health Act is legislation that, if passed, would create a single payer, publicly financed, universal health care coverage system in New York State (A.04738/S.04840). Under the bill, every New York resident would be eligible for comprehensive health care coverage, regardless of age, immigration status, employment status, financial status, or disability status. There would be no network restrictions, deductibles or co-pays. Benefits would include comprehensive outpatient and inpatient medical care, primary and preventative care, prescription drugs, laboratory tests, rehabilitative, dental, vision, hearing and all benefits required by current state insurance law, by publicly funded medical programs or provided by the state public employee package.

In December 2017, the New York State Health Foundation commissioned the RAND Corporation to assess the savings, costs, and feasibility of the New York Health Act. Using conservative estimates, the RAND study concluded that New Yorkers would use more health care services under the new single-payer plan than under the current system, even as total health care spending would be slightly lower in 2022 growing to a savings of $15 billion annually by 2031 due to administrative efficiencies.The study highlights that New Yorkers in the bottom 90% of household incomes would save an average of  $2,800 per person annually.

In New York State, despite the Affordable Care Act and public insurance programs, there are 457,000 immigrants that are ineligible for coverage due to their status (undocumented, unauthorized, or PRUCOL).  In New York City alone, there are approximately 250,000 ineligible, uninsured residents. If passed, the New York Health Act would extend coverage to all these individuals.

“The NY Health Act will provide complete health coverage for every New Yorker, whoever you are and however you got here,” said Assembly Health Committee Chair and bill sponsor Richard N. Gottfried.  “Having all of us in the same health plan will make it easier to use and make sure it is as good as can be, while saving money for almost every New Yorker.”

"New York Health Act is not only feasible, but the most fiscally responsible option for our State," said State Senator Gustavo Rivera, ranking member of the Senate Health Committee, "Under the New York Health Plan, those New Yorkers who were previously unable to access care, especially those in low-income immigrant communities, would be able to receive care without having to rely on emergency services. As the ranking member of the Health Committee in the State Senate, I am committed to continue to work with advocates and my colleagues in the legislature to finally make this proposal a reality."

“Today, health care costs are growing faster than employee incomes. But employer-based health insurance is failing to cover the extent of employees’ health care needs and costs. A single payer health system could change that by lowering costs of employee health benefits and cutting the administrative and health care provider costs associated with insurance. These are savings human service providers could put towards expanding the services they provide to clients and making sure their employees are fully equipped to do the work they do for their communities. With a New York single payer health system, we would be able to truly make a health a human right,” said Winn Periyasamy, Policy Analyst for Health at FPWA.

“The costs of uninsurance or underinsurance to individuals and society at large are enormous, resulting in poorer quality of life, missed work, bad debt, delay in care due to fear of costs, inefficient care, and diminished benefits of having a healthy, productive population. Almost 15% of Asian Americans  ages 18 and over remain uninsured in New York City; a majority (89%) of Asian Americans uninsured in NYC are foreign-born. It is important that our communities learn more about the New York Health Act and what can be possible when we work with our elected officials to ensure health care is a right, and not a privilege,” said Vanessa Leung, Co-executive Director of the Coalition for Asian American Children and Families.

“CPC serves over 60,000 Asian American, immigrant, and low-income New Yorkers each year, and one in five people that walk through our doors lack health insurance,” said Carlyn Cowen, Chief Policy and Public Affairs Officer at the Chinese-American Planning Council, “It is critical that immigrant communities and organizations educate themselves on this legislation, which would transform access to healthcare for these communities.”