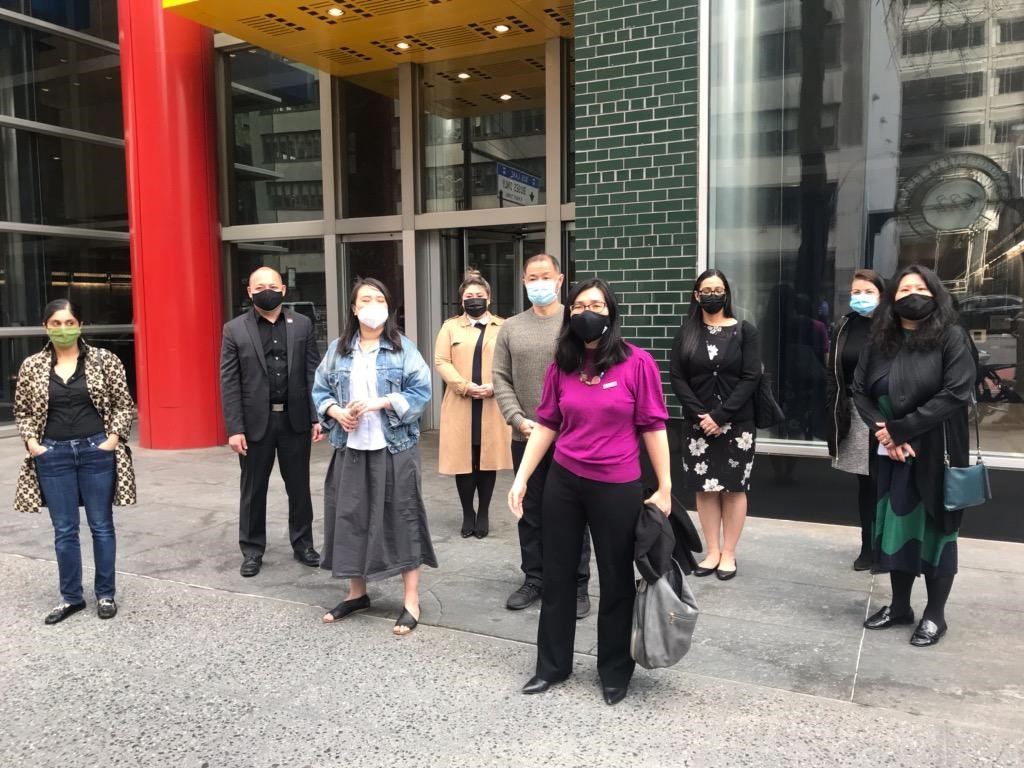 On March 26th, CPC joined Asian American community leaders to denounce Governor Cuomo’s March 17 statement on the tragic mass shooting in Atlanta. The Governor’s words and framing reinforce the hateful and racist rhetoric that has scapegoated Asian American communities throughout the COVID-19 pandemic. His 183 word remarks both called into question whether or not the attacks were racially motivated, and repeating “China Virus” six times, and while it was clearly in reference to Trump’s misuse of the term still reinforces hateful rhetoric. In fact, bias-based incidents against Asian Americans rose 933% in New York City alone in the last year, the highest of any city in the US, according to recent reports. Stop AAPI Hate reported 3,800 incidents in 2020 alone, and many more incidents have gone unreported.

In addition, the community leaders denounced over a decade of systematic disinvestment from the Asian American community, the fastest growing population in New York State at 1.8 million (10% of the population) and growing. Asian American community groups have been struggling to meet growing need during the pandemic, as Asian American unemployment grew over 6,900%, the highest of any racial group. Asian Americans also were hit harder by the COVID-19 pandemic, with Chinese New Yorkers facing the state’s highest COVID-19 mortality rate at 35.7%, compared with 25.5% for all Asian Americans, and 23.7% for Black New Yorkers. Yet language access has lagged on information from testing and tracing to vaccine access. Last year, the Governor vetoed a popular bill that would collect disaggregated data on the diverse Asian American ethnic groups.

This budget package is the first of its kind in the nation and was presented at the town hall co-hosted by the NYS Asian Pacific American Legislative Task Force and the NYS Black, Puerto Rican, Hispanic, and Asian Caucus yesterday. In addition, this package calls for support for groups providing gender-based violence services, the incidences of which have skyrocketed over the last year.

"New York prides itself on our diversity and inclusiveness but when those principles are under attack, it's time to put our money where our mouths are. The violence against our AAPI neighbors cannot be allowed to stand and these funds will help combat the bigotry behind these assaults. We must support this emergency budget allocation," said Senate Deputy Leader Mike Gianaris.

“In wondering whether the Atlanta killing spree was a hate crime and repeatedly verbalizing what is now considered a slur against Asian-Americans, Governor Cuomo's preposterous comments about the onslaught of anti-Asian hate was at best appallingly aloof and at worst moronically malicious. If he actually cares about our community, he should say something studious not stupid, and then put his money where his mouth is and push for meaningful funding so that the community will be on stronger footing to avert hate in the first place,” said State Senator John Liu.

"Violence and hatred directed at the AAPI community cannot go unanswered in this year's New York State budget. I join my Senate colleague John Liu, Wayne Ho of the Chinese-American Planning Council, and the entire AAPI community in demanding the Governor include an emergency allocation of $19.5 million in the budget for restorative justice and community based services. New York's AAPI community has been shortchanged for far too long. The recent spate of anti-Asian American hate crimes are a call to action we must heed," said State Senator Brad Hoylman.

"The recent rise in violence and hate crimes against the Asian community is horrifying, and we cannot allow any minority group to be attacked. All of our elected leaders must step up and make it a priority to take any and all measures to put an end to this dangerous racism. It's on all of us to denounce the rise in anti-Asian violence and support our Asian brothers and sisters,” said State Senator Brian Benjamin.

"In New York, it is our diversity that gives us strength. Throughout the pandemic, and before, Asian-American communities have seen an astronomical rise in hate crimes and anti-Asian sentiment leaving social service organizations to fight the tide of prejudice and provide support. Enough is enough. I am proud to represent the Asian American communities of southern Brooklyn and will continue to fight for additional investment into these communities and will encourage us all to be better neighbors and value their contributions to our city,” said State Senator Andrew Gounardes.

There has been a sharp increase of hate crimes directed at AAPI communities across our country, and New York can and should do a better job of addressing this spike in anti-Asian hate incidents. It is our duty to not only condemn and call out these disturbing acts when they occur, but we must also commit to identifying ways that we can stand in solidarity with our Asian American communities. We must start with providing organizers and advocates with resources to assist them in their fight against hate, and I am in full support of the Coalition for Asian American Children and Families’ request for New York to commit to providing more support to the Asian American community,” said State Senator Julia Salazar.

“Combating violence against communities means that we are investing the resources into those communities. Since the beginning of the pandemic we’ve seen members of the Asian community attacked and the rates of violence against them are alarming. Our State needs to invest in the Asian community by providing economic security, providing relief to the small businesses, funding excluded workers, expanding language access, and much more. I stand with members of the Asian community in calling for more resources, funding and true investment into the programs that serve them," said Assemblymember Harvey Epstein.

“Asian American and Pacific Islanders make up 11% of our state’s population. They are our neighbors, they are our essential workers, they are our siblings, and they deserve our government’s protection and swift action. I represent AAPI communities in my district so I join my colleagues in demanding that AAPI communities see an increase in funding in the New York State budget. It is a travesty that APA organizations are currently only allocated less than 1.5% of our total social services funding. We must invest to Stop Asian Hate and to promote love of our AAPI communities,” said Assemblymember Jessica González-Rojas.

“The increasing anti-Asian attacks and rhetorics are deeply disturbing and have no place in New York. We must do better to root out hate in all forms and that means backing up our words with actions and funding,” said Assemblywoman Nily Rozic (D,WF-Fresh Meadows). "We must stand with and support the AAPI community in the upcoming state budget by providing emergency funding to address the rise in anti-Asian violence,” said Assemblymember Nily Rozic.

“The increasing anti-Asian attacks and rhetorics are deeply disturbing and have no place in New York. We must do better to root out hate in all forms and that means backing up our words with actions and funding,” said Assemblywoman Nily Rozic (D,WF-Fresh Meadows). "We must stand with and support the AAPI community in the upcoming state budget by providing emergency funding to address the rise in anti-Asian violence,” said Assemblymember Dan Quart.

“The racist myth of the model minority has long cast a shadow on the Asian American community and rendered us silent and invisible. Our rich and diverse histories and our struggles with racism have been erased. Today we stand strong -- in solidarity -- to give voice to our community's struggles during this most challenging time when we are not only suffering from a pandemic, but also spikes in xenophobia and racial violence. And we demand that Governor Cuomo and NY State hear us and invest in our community recovery and healing through prioritizing the collection of accurate data that can help elucidate our diverse community needs and reduce inequities we face; and through supporting community-based organizations that are every-day supporting Asian Americans who are most marginalized. We will be invisible no more," said Anita Gundanna and Vanessa Leung, Co-Executive Directors of CACF: the Coalition for Asian American Children and Families.

“For too long the fastest growing community in New York State has been systematically divested from and made invisible. The increase in anti-Asian hate violence combined with the economic devastation of the pandemic has left our community in crisis. It is well beyond time for the Governor to stand up against anti-Asian hate crimes and for the State to invest financial resources into the Asian American community,” said Wayne Ho, President & CEO of the Chinese-American Planning Council (CPC).

“With the increase, in anti-Asian violence across the country, AAPI survivors of gender-based violence deserve to feel safe in New York. Womankind is committed to speaking out against racism, misogyny, and violence. We call on the Governor to do the same. We are asking the Governor to step up and fully commit to meeting the needs of New York’s AAPI community members. This can be done with legislative action and investment in the resources that support the community that has been historically underserved. The time is to act is now, Governor," said Yasmeen Hamza, Executive Director of Womankind.

"Survivors of gender-based violence, particularly Asian American survivors, have had to assume an additional layer of trauma, caused by community violence rooted in racism, during this pandemic. This trauma is not new. The survivors we work with need a Governor that will continue to invest in their healing, and it is clear that the current administration has failed, and continues to fail survivors," said Kavita Mehra, Executive Director of Sakhi for South Asian Women.

“Throughout the pandemic, there has been a surge in gender-based violence across the nation. Our Asian American immigrant survivors living in New York are faced with inconceivable challenges during this unprecedented time. In addition, Covid-19 has worsened long-standing racism, xenophobia, and Islamophobia and Asian American and Pacific Islander (AAPI) communities are experiencing a surge in widely publicized racist violence across the country. But our communities have been long under-resourced, and grossly underfunded. We are asking for the support of the Governor to demonstrate financial commitments, and stand in solidarity with our communities. Combatting this wave of hate—and its root causes— requires supporting organizations like ours who are anchors in our communities with track records of successful violence prevention work and authentic community connections,” said Jeehae Fischer, Executive Director of the Korean American Family Service Center.

“Our analysis has always been that we need community resources to combat racial violence and that means investing in AAPI-led organizations especially those affected by misogyny--including survivors of gender based violence and harassment, sex workers, migrant workers, domestic workers, and other low-wage workers--be centered in the conversation and in the solutions. We ask that politicians listen to AAPI-led and especially Asian women & TGNC-led organizations and follow our lead. We join others today to call for community-centric responses of structural support and community safety that involves deep and ongoing investment in our communities who are on the ground filling gaps already and do not involve more law enforcement. We refuse to ignore that anti-Asian harassment and violence has disproportionately impacted working-class women and femmes, who know firsthand that sexual violence, sexism, and racism are intertwined and steeped in US imperialism,” said Ariel Hsu, a member and leader of National Asian Pacific American Women’s Forum (NAPAWF) NYC.

"NMIC stands with the Asian American community in denouncing all anti-Asian hate. We ask the State to provide additional resources so the nonprofits on the ground can address the social services needs of our Asian brothers and sisters that for far too long, have been neglected. Now is the time to step up and do what's right for the Asian community," said Maria Lizardo, LMSW, Executive Director of NMIC. 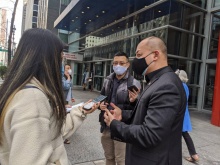 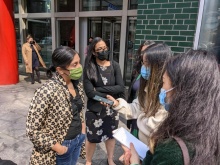