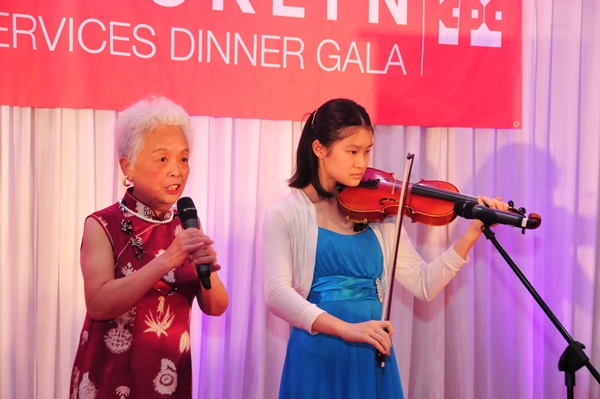 One particular highlight from the evening stood out as the embodiment of CPC Brooklyn’s spirit -- 15-year old Audrey Soo and 72-year old Ms. Jin Mei Chen held a captivating performance of the American national anthem. All eyes and ears were on Audrey setting the tone and melody on violin and Ms. Chen delivering a beautiful rendition of the patriotic song.

It’s hard to believe that only five years ago, Audrey was a student at the CPC After-School Program at PS 153 and Ms. Chen had just immigrated to the United States. Congresswomen Nydia Velázquez had particularly praised Ms. Chen, a member of CPC Brooklyn Senior Services, whose vocals had struck a resounding chord of inspiration within the 23-year Congress member. As the first Puerto Rican woman to be elected to Congress, Ms. Velázquez was no stranger to the difficulties of new immigrants and gushed with pride upon seeing Ms. Chen’s performance.

In the five years since immigrating to the U.S., Ms. Chen has since enrolled in CPC’s ESL class and Citizenship class, where she studies day-in and day-out to learn English, educate herself and assimilate with the country. As member of the CPC Senior Services, she has made many great friends among the other senior members, who had all banded together in her support. From numerous encouragements, to fashion advice and even lending their personal best fashion accessories to Ms. Chen, the other senior members truly demonstrated how powerful close community bonds can be.

“It was incredibly inspiring to see all the work Ms. Chen personally put in to practicing the lyrics and making sure she gave the national anthem the respect and effort it deserved. I doubt there was a single person in the crowd of over 5​50 supporters who didn’t feel deeply patriotic. Her success and dedication really makes you feel accomplished as a service provider because we know there are many others like her, working hard to chase that American Dream.”, said Janice Won, CPC Interim President & CEO.

It is stories like hers that continue to motivate the CPC Brooklyn Community Services to work harder in serving the smiles of Brooklyn with dedication, integrity and professionalism.

CPC Brooklyn Community Services would also like to thank our generous sponsors for working with us to provide our community with the foundation to succeed.