CPC Supports the Creation of the 2020 Complete Count Commission 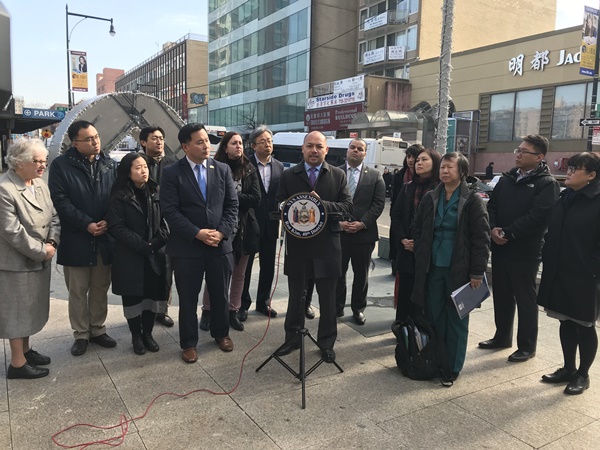 On February 14, 2018, CPC joined Assemblymembers Marcos Crespo, Ron Kim, Nily Rozic, and State Senator Toby Ann Stavisky, Korean American Civic Empowerment, Asian American Federation, Minkwon Center for Community Action, and other other community leaders to speak on the importance of preparing for the 2020 Census. The results of the Census determines how funds for federal programs are allocated and how Congressional seats are divided. Undercounting or inaccurately counting communities can hurt funding for community programs and Congressional representation for the state. According to Assemblyman Marcos Crespo, sponsor of the Assembly bill and Chair of the Assembly Task Force on Demographics and Reapportionment, “Undercounts during the 2000 and 2010 Census have cost New York two congressional seats and a loss of tens of billions in federal aid for a range of programs from education to housing to transportation."

The press conference attendees called on the State Senate to pass the legislation needed to establish the “2020 Complete Count Commission”, which had already passed the Assembly in 2017. The bill would authorize the commission to identify the issues that led to undercounting in 2010, and fund the state’s preparations for the 2020 Census, in order ensure every New Yorker is counted.

“It is deeply important that we get this done right,” said Assemblyman Ron Kim. “Communities with large immigrant or non-native English speakers are at the greatest risk of being overlooked by the 2020 Census. New York has already been dealing with the damaging effects of underrepresentation from both the 2000 Census and the 2010 Census. Unfortunately, the many worrying trends we have seen on a national level this past year leave us even more concerned. A combination of fear, intimidation, and institutional barriers during the undertaking of the 2020 Census may cause irreparable harm to our state. There is so much at stake, from the number of congressional seats we are given to the amount of funding our communities stand to receive—or lose. I thank Assemblyman Crespo for his leadership in this area, and all of our colleagues and community leaders for supporting the passage of this crucial bill.”

Wayne Ho, President & CEO of the Chin­ese-American Planni­ng Council, said, “We are extremely troubled at the prospect that many people in our community may be undercounted in the 2020 census, just as they have been in years past. If we do not make sure that every person is fairly counted, New York could again lose out on untold amounts in federal funding. For 53 years, CPC has remained dedicated to empowering Chinese American, immigrant, and low-income commu­nities, and we know that the needs of a community are propo­rtionate to its size. If we are consistently undercounted, we will consistently be underfunded. We thank Assemblymember Crespo, Assemblyme­mber Kim, and their colleagues for standing up for all communities in our city to ensure a compete count."