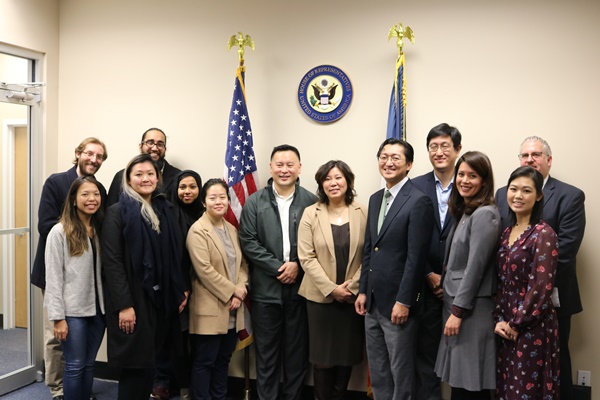 On December 4, 2018, U.S. Congresswoman Grace Meng hosted a press conference announcing the launch of the New York City APA Complete Count Committee, organized by the MinKwon Center for Community Action, a member of New York Counts 2020, and other Asian Pacific American organizations and leaders, alongside Jeff Behler, New York Regional Director of the U.S. Census Bureau and New York Assembly Member Ron Kim. The purpose of this committee is to have a fair and equitable 2020 Census, coordinate messaging and community outreach especially in hard-to-count Asian American communities, and to advocate against initiatives that would hurt a fair count, including the addition of a citizenship question. A fair and equitable count is critical in determining the economic, social and political voice of our neighborhoods and ensuring fair representation, funding and investment for all communities.

“I cannot overstate the importance of accurate and reliable census data. The information collected from the census is used for everything from how we determine the distribution of congressional seats to how we allocate billions of dollars in federal resources, an issue that is particularly important for minority and immigrant communities,” stated U.S. Congresswoman Grace Meng. “The APA Complete Count Committee will be a critical component in the effort to secure a fair and equitable 2020 Census for the Asian American community and I’m proud to be part of its launching. I thank the MinKwon Center and all who are gathered here today for working to obtain an accurate and complete census count.”

“I am grateful for the work of our community partners like Minkwon and especially our Congresswoman Grace Meng who is leading the charge for us in DC to make sure every immigrant is counted during this census,” said New York Assembly Member Ron Kim. “At the state level, we passed a commission to create the foundation and structure behind our efforts for a compete count but we are trailing behind other states in funding such measures. I plan on advocating as much funding to make sure we have enough recourses for this count."

“CPC is proud to stand with our partners to support the creation of the New York Asian Pacific American Complete Count Committee,” said Amy Torres, Director of Policy and Advocacy at the Chinese-American Planning Council. “The Census is the largest, non-military government undertaking — no other public or private entity is able to capture such comprehensive information about our communities. While each individual person’s Census response is protected by law, the Census bureau publishes area-wide and community data reports that are then used to plan every facet of our daily lives. The number of people counted in an area determines the size of our school classrooms, the locations of parks and playgrounds, the routes that ambulances take to and from hospitals, where businesses decide to hire or expand, and so much more. When communities are undercounted, they appear invisible and receive a smaller share of these resources. They also receive less representation in local, state, and federal government. In 2010, APAs became the fastest growing racial group in the United States. Our growing and diverse community cannot afford to be undercounted. We cannot afford miss out on a decade of resources that empower and uplift us as individuals, families, and a community. We also cannot afford to lose political power and representation in government. For this reason, CPC is proud to support the APA Complete Count Committee and looks forward to our work together.”

“We welcome the creation of the New York City APA Complete Count Committee,” said John Park, Executive Director of the MinKwon Center, “because our communities deserve full and equal participation of the 2020 Census. Our communities and neighborhoods have unique needs and voices that must be reflected on our country’s census if we are to hold our deepest civil and democratic values to heart. We will advocate for a fair and equitable count, for public resources for effective community outreach, and against any initiatives that seek to intimidate and silence our communities.”

“Shetu hopes that the Complete Count Committee is able to target and reach communities that are undeserved such as the Bangladeshis through Census education,” said Nusrat M. Jahan of Shetu, Inc. Shetu is a community-based non-profit organization which was founded with the aspiration of assisting the low-income, Bangladeshi immigrant populations in NYC.

Margaret Fung, AALDEF Executive Director, said, “AALDEF will fight with our coalition partners against politically motivated efforts to suppress the accurate Census count of immigrants and their families. The harm to immigrant communities is real, and we will use all legal options at our disposal to protect our community.

“A Complete Count Committee that specifically targets the APA community is critical for the accurate representation of the Asian American community in NYC,” said Will Spisak, Director of Programs and Farzana Linda, Advocacy & Organizing Manager of Chhaya CDC. “Historically, Asian Americans have been underfunded when it comes to social services and are often excluded in the city’s assessment of what NYC needs and who those services are made accessible to. The historically low participation of Asian Americans on the Census has served to further exacerbate that. This is due to lack of education in the community on what the Census is as well as distrust and fear of the government. With the possible addition of the new citizenship question and the current political climate, the fear has only intensified and will result in an even greater under-count of the Asian American community. Additionally, due to the tremendous diversity of the APA community, it is necessary that a more targeted and culturally competent approach be taken to engage them on the Census. For these reasons, Chhaya CDC along with other trusted APA partners will be joining the APA Complete Count Committee.”

“The 2020 Census is important because it affects how resources are allocated for the next 10 years. In order for each community to get the resources they need, every count matters. It is in your hands to be counted,” said Karen Zhou, Sheepshead Bay Center Director of Homecrest Community Services, Inc.

“One of the first civic acts new immigrants to our country can take is to participate in the decennial census,” said Howard Shih, Research and Policy Director of Asian American Federation. “As the fastest growing population in New York City that is majority immigrant, Asian Americans must stand up and be counted so that we the advocates can push for the policy makers to address the needs of our communities.”

"At a time when immigrants are attacked politically and small businesses are marginalized economically, we need all those who live and work in our community to participate in the 2020 Census," stated John Choe, Executive Director of the Greater Flushing Chamber of Commerce.  "Everyone counts -- and the lives of our family members, neighbors, fellow workers and business owners depends on it!"

"An inaccurate count can gravely misrepresent the needs of the vastly diverse Asian American community in New York. Census must be a household word in different Asian languages, across all ages, levels of education, and income," said Wennie Chin, Senior Manager of Civic Engagement at the New York Immigration Coalition (facilitator of New York Counts 2020).

“The Charles B. Wang Community Health Center is a community health center that provides comprehensive primary care and support services to those who are medically underserved, with a focus on Asian Americans,” stated Anna Xing, Special Projects Coordinator of Charles B. Wang Community Health Center. “In addition to providing health care to more than 58,000 patients last year, we work with many hospitals, health care providers, local and state health departments and other partners to target interventions in our community that address disease and mortality. Like many public health practitioners, we use census data to understand the distribution of diseases and health concerns such as cancer and obesity across the populations that we serve, including drilling down to race and ethnicity to identify health patterns across demographics. Inaccurate census data could lead public health practitioners to invest in solving a problem that does not exist – or worse, to overlook one that does. The Asian community has always been undercounted, the Health Center is a part of the APA Complete Count Committee because we support a fair and accurate census.”

CPC is a proud member of APA VOICE, Asian Pacific Americans for Voting and Organizing to Increase Civic Engagement, a coalition headed by the MinKwon Center.